Located in the former home of Lovecraft Biofuels, Apex has abundant outdoor seating that packs ’em in on warm days. Inside, the renovated industrial space is freshly painted and exploding with customer chatter. The room is dominated by a lengthy bar and there’s a trio of pinball machines in the foyer. Like Hopworks, Apex has identified itself as a bike-friendly establishment, with racks for helmets and a line of wall hooks for backpacks.

There’s no kitchen, but Apex abuts Los Gorditos a hearty Mexican restaurant with scads of vegetarian options, and hungry visitors are encouraged to order chow there and bring it back. Since Apex doesn’t serve hard alcohol, they aren’t required by the OLCC to offer the ubiquitous salads and paninis found at every other start-up pub.

I was seated at the bar mulling over the 40-plus brews on tap when I was struck by Cupid’s arrow. The beer I was sipping was insanely tasty. I’ve had good fortune with beers from Portland’s Upright Brewing, and my luck was holding. Upright’s No. 7, described as a “strong farmhouse ale” is a burly and complex Belgian-style brew with a high, dry, sour taste cushioned with fruit and spice notes. “Holy crap, this is delicious,” I said to drinking buddy Lucy. Unconvinced she yanked the pint glass out of my mitt and took a healthy pull.

“Wow, that’s really good,” she agreed. We made plans to break into the Upright Brewery that very night and purloin the entire inventory of No. 7, but neither of us had access to a really big truck. Curses! Foiled again! Not to worry, the selection of beers here is awesome, with a heavy emphasis on those tangy Belgians. Pedal on over, sport! 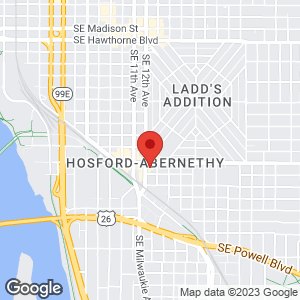 Pok Pok's wings are just the beginning when it comes to this foodie hood's edible delights.

Take your pint out to the patio for a shot of Vitamin D.