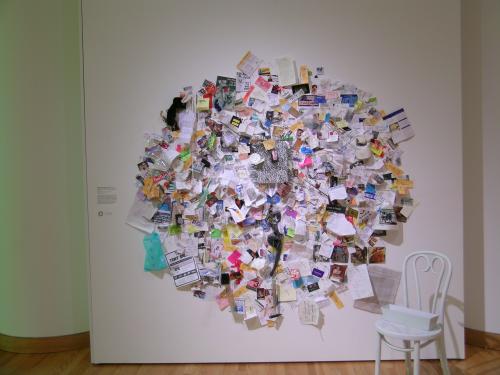 Two recent events bring up the unspoken contract between viewer and artist: 1. The way visitors to the Seattle Art Museum interacted with Yoko Ono’s "Painting to Hammer a Nail" and the way artist (and former museum guard) Amanda Mae interacted with their interactions as reported by The Stranger’s Jen Graves; and 2. a simple photo album on a pile of blankets in Rose McCormick’s "Grand Ronde" at New American Art Union.

One of the most straightforward aspects of the contract as we are taught to understand it states that viewer will not touch the work. Numerous 20th century art movements attempted to subvert a number of aspects of the contract, among other things demanding that the viewer consider why he or she behaves the way s/he does toward art. But really, the contract never changed. (Contrast this with the current state of the digital world which is all about open source, Creative Commons, the mashup; about contributing and feeding back to the well of digital creation.)

It’s all about the money, honey. Really only Seth Sieglaub figured out how to sell the ephemeral. The arts marketing system (from artist to gallery to institution) needs fixed objects that can accumulate value. Sure, there’s plenty of work that explicitly invites our contribution/interaction, like Jesse Hayward’s upcoming installation for TBA:09. But there the invitation to interact is clear.

Viewing McCormick’s installation (I’ll review it shortly, it’s extraordinary) on the day it opened, I saw another visitor flipping through the photo album. As one of the few objects in a spare installation, its contents may well be critical to the reading of the work. But as I saw no invitation to engage the album, I didn’t touch it. If I flip through the photo album, what’s to stop me from sitting on the blankets or unfolding them into a more comfortable arrangement. What if the suitcases in the corner also contain important information about the piece. My point is that if the artist intends that our viewing contract should deviate from the norm, I need specific invitation. Tell me that the rules of this game are different.

For Ono’s piece, the Seattle Art Museum explicitly (via wall label) invited viewers to "pound a nail into this painting," thus altering the original terms of the artist-viewer contract. This has not always been the case; it has been hung with a Do Not Touch sign at other institutions. But viewers didn’t just hammer a nail. They nailed up scraps of paper, on the painting and on the surrounding wall. Why? Jen Graves reports that according to Mae, "a person working in the registrar’s office encouraged a friend to start the trend," which the museum denies. According to Graves, this happened once before in London. The museum checked with the artist to see if the scraps were okay. Yes.

Then there is the whole controversy about Mae’s further off-contract interaction with the piece. She removed the scraps and sorted them into piles on the floor. It’s a complicated situation that you can read about in Grave’s piece on the mess. In a nutshell, she was fired from her job at the museum and subsequently castigated by an Ono curator.

Suffice it to say that while scrap addition was declared by the institution (with after-the-fact permission from the artist) to be okay intervention, scrap removal was not. But as the new contract was not communicated to viewers, why expect that they would sheep-like follow and obey the new unspoken rules: scraps of paper only (not condoms, say) and on, not off. And as visitor how would I know that the artist had okay’d this interpretation of her piece?

There’s a lot more here. It happens that Ono owns the "painting." So that removes the complication of what a collector would say about a piece they owned being altered. But if Seattle Art Museum staff actually did instigate the new rules without first checking with the artist, that’s a serious problem. And I think, too, that as much as I love Yoko Ono’s work, it’s disingenuous for the Ono curator to criticize Mae for interacting with the piece without permission when that’s exactly what the first person who nailed up a piece of paper did.

The bottom line is that if you open up the doors, you have to expect that people are going to enter. And they may not file in in single file.

On the other hand, if McCormick wants interaction, she might need to ask for it.