Recently back from showing at EAST/WEST BERLIN, Maldonado has been thinking about border crossings, the immigrant experience, and growing up as an indigenous man, a Mexican-American man, and assimilation. For Maldonado these "Green Screen" paintings—each representing the exact dimensions of one of the televisions that have been in his life—speak to his experience of learning English from watching American television and what that means for the process of acculturation with Maldonado a case study of a broader immigrant experience.

Burkheimer goes vertical, investigating "his interest in the space, real or perceived, between the object of contemplation and the object of utility. Using the gallery as his architectural reference, Burkheimer created objects within the space as points of exchange with the public." Department Head at OCAC, Burkheimer in the last year was curated into the Call + Response exhibition at MoCC and co-curated the one-night exhibition Open House Opening.

Leach shows Julia Mangold’s wax and graphite-coated sculptures with a group of related graphite and wax drawings on paper and board. It will be interesting to see how these works have a conversation with a selection of drawings by Donald Judd also on show. 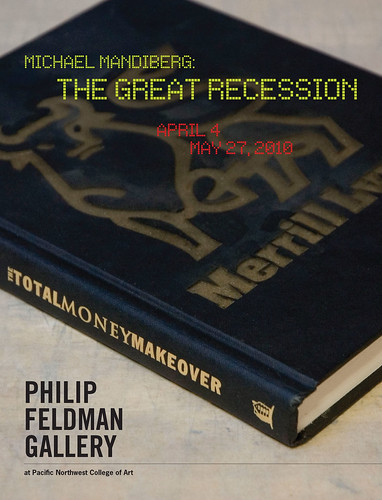 Exploring the psychic implications of the current economic difficulties as well as "late Capitalism, gold hoarding, and the end of an empire." He says of his work: “I am an a appropriationist at heart. I derive visual inspiration from the internet, conceptual art, design, the end of print, and the dying American empire.”

For his first solo exhibition in the Northwest, Milwaukee-based artist Colin Matthes is doing a short-term residency at Igloo gallery, culminating in a site-specific installation of scavenged scrap wood and found objects with high tech gizmos and survival gear to "create a lighthearted, yet poignant installation referencing stage sets, flea markets, unrealized innovations, and trade work. The installation will focus on creating an environment that invites the viewer to imagine small victories in hostile locations while encouraging reflection of how our own lifestyles contribute to creating these dynamics."

"A fog-laden photo by Lisa Berry (the show’s namesake), the repurposed home videos of Laura Mackin and the playful use of interior/exterior spaces by Grant Hottle all welcome the new season with hesitant, but open arms. Whether it is the vaguely familiar mountains mirrored in new work by Calvin Ross Carl, the scribbled paint strokes by Lisa Kowalski, or the playful assemblage by Artur Silva, this show will make you want to go outside and breath a chest full of fresh air. John Berry’s subtly crafted linocut may be the quiet kid in the corner not yet ready to venture out and greet the season."

"A sensory experience of visual and sonic stimulations," with new paintings, paper sculptures, drawings, and a collaborative light/sound sculpture.

A show of original surrealist photolithographic collages from the early 1950s by the Japanese artist, Toshiko Okanoue. "Okanoue’s collages, created when she was in her mid-20s in post-war Japan, were constructed largely from American picture magazines such as Life and Vogue. Mining these rich visual sources of American popular culture, Okanoue’s beautiful surrealist imagery expresses the dreams of a young female artist in Japan standing at the crossroads of events and movements of enormous historic significance.

This Contemporary Dance Festival Is Ready to Broaden Portland’s Horizons

Ripping the City with Amanda Mailey